Halifax Prepares the Farm for Summer

On Friday 9th June, fifteen workers from Halifax banks came down to Roots & Shoots to help prepare the farm for the summer.

These dedicated volunteers showed up bright and early, coming from  far and wide – with one individual driving two hours just to make it! – to make a huge difference to our Roots & Shoots service at Sutton Bridge Farm.  Being the first visit for many, Ricky, head of Roots & Shoots, gave them all a brief history of the projects.  After seeing a picture of how Roots & Shoots looked like before it had been landscaped, volunteers were amazed at the magnificent work accomplished by both beneficiaries and staff.

They separated themselves into three groups to help beautify the farm after the harsh winter winds struck our buildings and the cold, hard ground made pulling weeds difficult.

The biggest group set about tidying up the area around the training room, also used as the site’s office, that had become overgrown with weeds and a couple feet of nettles.  With these clear, they then sanded and then painted the little green building, not only giving it a fresh coat of paint but also a new lease on life.

While on the topic of nettles, the next group tackled dozens of flowering stinging nettles.  With short sleeves and jumpers off because of the hot weather, there were a few stings in the weeding group.  They did a spectacular job, ripping weeds out from the parched earth and turning the tough soil as best as they could to be ready for planting.  With three vegetable patches clear, they moved into one of our enclosures to detangle weeds from fruit bushes.

The last group was the smallest and they managed to complete so much in such a short amount of time.  They cut back the hedges that had been spurred on by winter rains and were leaning onto the drive.  Then they cut back the bushes around the Hydrotherapy Pool car park and neatened the hedges leading to the pond.

We would like to say a big thank you to all the volunteers who could come along and help out!  You all did an amazing job and were an absolute delight to have at the farm.  We hope to see you again! 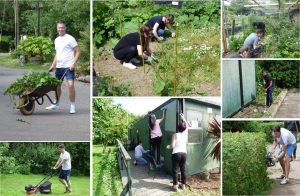 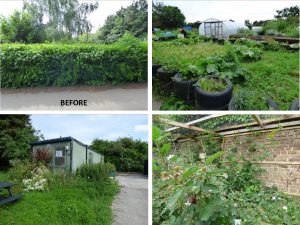 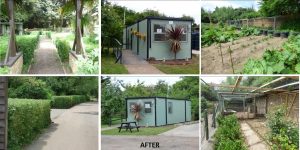